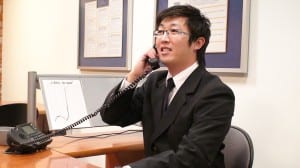 Before coming to Hubbard College, I was literally lost, trying to find out what to do with my life even though I was in my last year at the university!

When I completed High School I did not know what I wanted to do either, but I wasn’t worried as I was told I would figure it out in college (“that’s what college is for” I was assured) so I felt I had plenty of time.

I took all the classes I was supposed to take and did everything I was advised to do, all the while waiting for that elusive insight that would somehow illuminate me with the realization of what I was meant to do in life.

But now here I was with one year left and still no clue as to what I was supposed to do!

Needless to say, I was a nervous wreck — I became desperate as I felt like time was running out with an impending “deadline” quickly approaching and an empty, worried sick feeling in my stomach (a feeling I unfortunately became way too familiar with in school before exams on classes I really only half-understood if I was lucky and saw little value or use for in the first place).

I suspect my parents had a terrible time with all this as well.

In an effort to help, my father had me try different things and I was so desperate I agreed to do so. I tried various things like music, computer coding (programming) and even some athletics, but no luck.

His intention was good, but doing these things only frustrated both of us, as I didn’t like any of them (how could they be right for me when they were not done on my own determinism).

I kept wondering: “how can I not know what I want to do after studying so many different subjects?” especially since I was almost done with college….

To make matters worse, despite completing 3 years of college, I really didn’t know much at all.  Even though I had studied a lot of subjects and got decent grades, I actually knew very little. I memorized a lot to pass tests, but soon after, I forgot it all and was left with little true understanding.

To be blunt, I really didn’t get most of what I studied in college and I definitely couldn’t use it: I had lots of misunderstood words, tons of false data and I was left with nothing I could actually apply.

Talk about disappointment — I thought the university was where one went to REALLY learn….

Once I had difficulty with a particular class so I decided to re-take it with a different professor (I thought maybe the current teacher just didn’t explain it correctly or something like that).

Imagine my amazement when even though I re-took the exact, same class the following term, it taught totally different data!

I came to the chilling realization that there was going to be no sudden insight; no magical illumination or automatic realization where I would get the answers I had been awaiting for years.

It was all pretty much up to me to somehow resolve this dilemma.

Fortunately, I had heard about Hubbard College and just when everything seemed hopeless, I decided to come here and look into it.

And I literally never looked back!

Now, my viewpoint is “I KNOW”.

Not just with regards to what I want to do with my life but in everything I do.

I can now envision the result of what I am doing or will be doing and so can foresee if something will benefit me or not.

I now have abundant confidence in everything I do in life.

For example, when trying music, I was always very nervous before a performance, sometimes to the point that I simply could not perform. Now, I am very relaxed in front of a group because I am much more confident.

Knowledge gives confidence and certainty and now, I KNOW.

When I first came here, I could barely speak English. Now I can communicate and speak English better than ever before.

Now I am AT CAUSE. I can control the result of my actions by the application of the technology I have learned here!

I also managed to change my Dad’s viewpoint!

Before he assumed I knew nothing and so he would always tell me what to do. Now he respects my viewpoint as he can tell that now I KNOW what I am doing and he sees I am competent.

Perhaps the biggest difference between Hubbard College and the University I attended is that at Hubbard College, you APPLY the material you learn to an actual result.

It’s not just a bunch of theory; you actually USE it and can see for yourself that it is workable. It’s not based on opinion, but rather on key data that is needed in life — you can SEE that it works and it works EVERY time you apply it!

Every course in the degree program has an apprenticeship where you must apply what you learn at a real business to excellent results before you are allowed to go on to the next course.

These apprenticeships made it very obvious if I missed something when studying the theory, as then there would be no result.

I actually found out what I was missing and so I was able to fill-in the gaps and end up with full understanding!

It’s not like in a regular school where you may get 80% or 90% with no chance to find-out what you didn’t get — here, when you don’t get something, you get corrected on what was missed and you don’t pass till you DO get 100% of it.

When you complete all the courses and their apprenticeships, you do a final Internship where you have to use EVRYTHING you learned in the degree program, again at an actual business.

For my Internship I went to a local business where I worked for almost a month starting in Mid November.

The business had started in May 2011 and was sluggishly going along, sometimes making enough income, most of the time not. The owner was just coping, trying his best to keep going but he did not know what to do to expand the business.

He had tried all sorts of advertising, etc. but nothing really made a big difference, so he was anxious to see what a business degree intern could do for his business.

First I compiled and then inspected the main statistics from June to November 2011.

Then I debugged why the stats had gone down and why they had improved during that time to get the successful actions back in use. There was some mild improvement and this gave him some hope.

During the 3rd week I did marketing surveys to find out how to best promote for new customers, what to SAY in the promotional material and HOW to say it to get a response.

During the following week the promotional material was distributed and, the stat graphs immediately showed the following significant improvements:

I accomplished all of this in just under a month of applying what I learned at Hubbard College.

Since completing, I check with the business office once a week to ensure they are still keeping in the successful actions and their stats continue rising!

Honestly, if you are even vaguely uncertain about what you want to do in life (or completely lost as I was), doing the apprenticeships will give you the chance to experience various different business environments so you can see what direction you might like to go in.

You are encouraged to apprentice at as many different types of businesses as you like and so find what you really want to do.

I highly recommend it!

Josh Lin
Associate of Applied Science in
Management and Administration